Well in fact it is, as the israeli air force and land shells have managed to kill 55 palestinians in one day, added to the number of kills on friday and thursday, we will get a total of 92 palestinians who were killed in three days, which is bigger than the number of cockroaches you can kill in a week. or isnt it ?

These are no more than cockroaches in the jewish eyes, particularly that two thirds of the killed are civilians; women and children, the other third are men, only half of them were armed.

I tried to bring you the picture of that boy I seen on BBC which was actually two halfs of what was a boy. I could see the lower part of his body in one place, and the higher part like 1 meter far from him, some apatche missile must have hit him while he was preparing to launch his nuclear weapon towards israel.

Not to forget that guy who was still burning to death when the cameramen managed to enter the explosion area caused by the israeli heavy barrage. 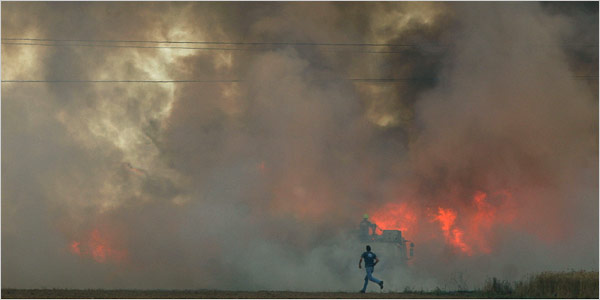 Most funny was that man who was crying and screaming on his dead doughter who got trapped between the floor of her room and the cielling that landed down after a missile hit the house, as the father was calling "Samah, Roddi" , meaning "Answer me, Samah" ..

did he expect a dead body to speak ? or did he expect the human rights watch or that organization of children or what the heck that is, to make a move and condemn the killing of his doughter? Even the animal rights organizations dont give a f*** about them cockroaches because these are not even animals.

I wanted to present you with more funny photos, but they are very "funnily painful" to show